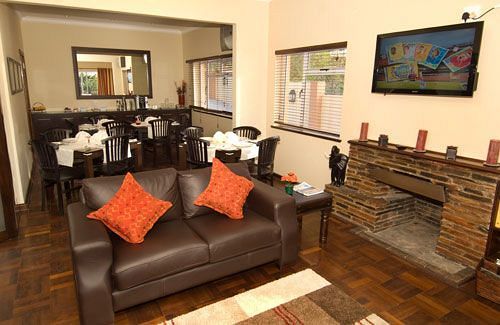 With a stay at Algoa Bay Bed & Breakfast in Port Elizabeth (Humewood), you'll be minutes from Bayworld and King's Beach. This bed & breakfast is within close proximity of Humewood Beach and Hobie Beach. Take in the views from a garden and make use of amenities such as complimentary wireless Internet access and a fireplace in the lobby. Additional amenities include a television in the lobby, tour/ticket assistance, and barbecue grills. Featured amenities include complimentary high-speed (wired) Internet access, complimentary newspapers in the lobby, and laundry facilities. Free self parking is available onsite. Make yourself at home in one of the 11 air-conditioned rooms featuring plasma televisions. Complimentary wired and wireless Internet access keeps you connected, and digital programming provides entertainment. Private bathrooms with showers feature complimentary toiletries and hair dryers. Conveniences include laptop-compatible safes and desks, and you can also request cribs/infant beds.